Loyalty In the Community

Demonstrating commitment to others

To practice Loyalty I will: 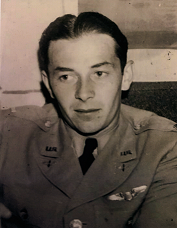 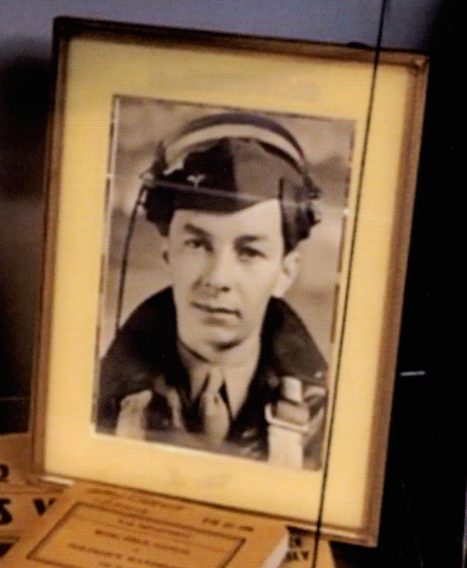 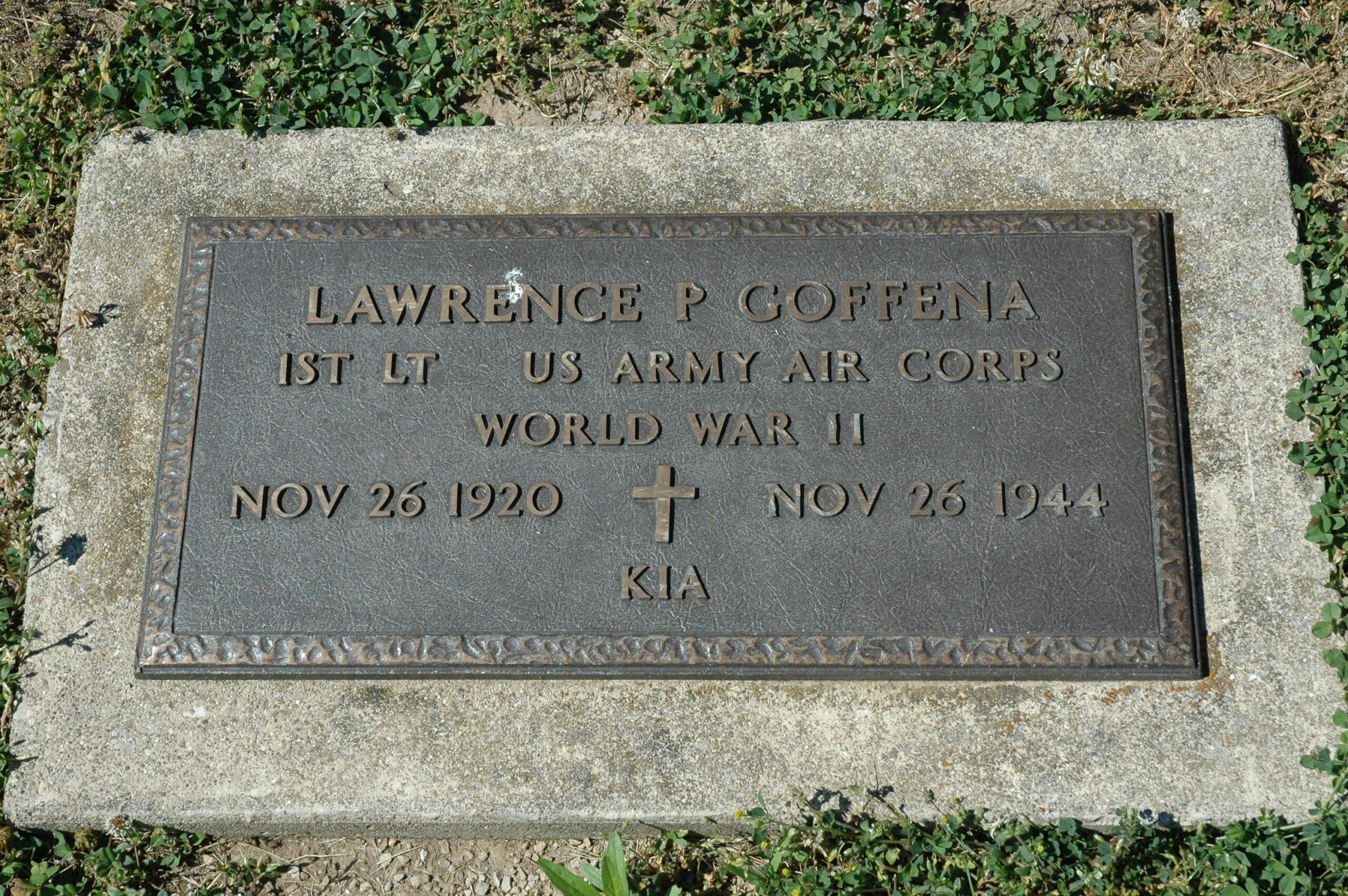 One Hundred years ago on November 26, 1920, Lawrence P Goffena was born. Seventy-Six years ago, November 26, 1944, was his 24th  birthday. On that day, he gave his life for his country. He was my grandfather’s 1st cousin, but closer in age to my dad.

It was WWII and he flew P-38’s in the Army AirCorp, from a base at Triolo Air Field in Italy.

On his birthday, 39 P-38’s, of the 49th  Fighter Squadron, left Triolo on a mission to airbases around Seregelyes, Hungary; roughly between Lake Balaton and Budapest. They broke into 4 groups of about 10 P-38s each and were called Hangmen Red, White, Blue and Green. Lt Goffena was number 3 in Hangman Green group.

The Nazis occupied Budapest and, as it was the only major path they had left into the Eastern Front, they were determined to hold it. Battle of Budapest had begun on October 29th, 1944. Soviet and Romanian forces were invading toward Budapest from the East and the US Army Air Corp was asked to attack from the west to destroy as many airfields, aircraft and other equipment as possible in front of the ground attack from the East.

At about 3pm local time, the 49th Fighter Squadron arrived at Target and began a strafing mission on their target, the Seregelyes Aurodrome. According to reports, the leading hangman groups rolled off the target because of heavy and accurate flak and enemy aircraft. Hangman Green Flight continued on to the Target.

Hangman Green Leader as well as Green 2 and 3 were hit by heavy flak. Green leader, and 49th FS leader, Captain Edwards, crashed almost immediately. Green 2, Captain DeMartini, was able to bail out and spent the remainder of the war as a POW.

Green 3, Goffena, was hit, but stayed in the air. A Certificate made by Major Donald Nance, of 49th FS reads as follows:

“At approximately 1506 hours, very shortly after a FW 190 was shot down by Lt Hughes, Hangman green three called Hangmen red leader. Red leader did not answer, Green three then called “any Hangman ship”. I answered and Green three said “This is Goffena, I’ve lost about six feet of my right wing and cockpit is filled with gasoline. I’ll have to bail out”. I said “Roger” and tried to turn around to find him, but as the air in my vicinity was filled with intense, accurate, flak, I was unable to turn. I neither saw nor heard from Lt Goffena after that.”

Lawrence Goffena did not return to base and nothing was known about his whereabouts until July, 1946.

In the meantime, his parents were notified within a week that he was missing, his belongings from his base in Italy were sent to his parents within the year. A report by DeMartini, hangman green 2 after his release from the POW camp after the war, stated that his captors said that 3 additional P-38’s were shot down with him and that the pilots were dead. On 11/27/1945, a finding of death was issued, since there was no indication of his survival.

Lawrence Goffena, the son of Lawrence and Myrl Ragon Goffena, graduated from High School in Sidney, Ohio in 1938 and worked for a local newspaper as an advertising salesman. Shortly after Pearl Harbor, he volunteered for the Army Air Corp and was accepted in February, 1942. After his initial training, he was assigned in the USA to train new pilots, but, according to my dad, wanted to go overseas. He was finally given that opportunity and arrived at Triolo Airbase in Italy on August 24, 1944, the same day as Captains Edwards and DeMartini.

On November 27, 1944, a notice of Lawrence’s 20th mission appeared in the newspaper. He had died the day before, on his 24th birthday, but no one knew that.

Eventually, on July 9, 1946 residents of Kaloz, Hungary who were working near a P38 crash site smelled a body. On August 29, 1946, Janos Varga made the following official statement:

“Undersigned Janos Varga, 33 years old, inhabitant of Kaloz, Hungary, state to the best of my knowledge that in the second half of November 1944 I saw 8 American twin-bodied fighters flying low to south-east direction fighting with German Messerschmidts. One of them suddenly turned to the ground and crashed about 3km distant from Kaloz in the field of Tuda Ferenc; it burst into flames and was burning for 3 days. I saw no parachutes.

In the summer of 1946, the workers near the crash felt the smell of a deteriorated body. On 9 July, 1946 with the help of Vlasits Gyula, inhabitant of Kaloz and with Farkas Karoly, Rom. Catholic priest we buried the remains in a German ammunition box near the wreck.

From the records, I’m guessing that Lawrence Goffena’s plane was damaged by flak, as per Col Nance’s statement above, and then shortly after, shot down by a Messerschmidt.

They also, then notified the US Army who on August 30, 1946 disinterred the remains in Kaloz, Hungary and began an investigation. Serial numbers on a recovered Machine Gun matched the gun installed on Lt Goffena’s P-38. Some personal property survived with the remains and later dental records of Lawrence Goffena were matched to the recovered remains, for a positive identification.

On September 18, 1946, the army reburied his remains in the United States Military Cemetery in St. Avold, France.

On October 22, 1946, Lawrence’s parents received a letter from a woman in Dayton, Ohio, whose mother, in Hungary, had seen Lawrence’s remains recovered. They had not heard from the military, so they sent a copy of the letter to the Army. The army investigated and confirmed it.

On November 12, 1946, an official KIA report for parents was written, but for some reason, not sent.

On September 17, 1948, Lawrence Goffena’s remains were quietly received by Salm and Sharp Funeral Home in Sidney, Ohio. A funeral and burial happened shortly thereafter, but I have no record of dates.

He is buried in Graceland Cemetery in front and slightly to the left of the Goffena Statue. Rest in Peace.

This article was originally published in the Sidney Daily News in Sidney, OH on November 27, 2020.  It is reprinted with the permission of the author.