The inner strength to withstand stress and do my best

To practice Endurance I will:

No Matter How You Say It: Endurance 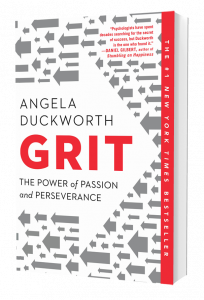 Angela Duckworth, a psychology professor at the University of Pennsylvania and the author of Grit: The Power of Passion and Perseverance submits that the secret to outstanding achievement is not talent but grit which she defines as a special blend of perseverance and passion. It sounds a lot like Endurance. In her book, she shares the grit scale that she has used as a predictor of success in West Point Cadets, National Spelling Bee Champions and other high achievers in business and sports. Her grit score was able to successfully predict who would Endure and succeed when other scales of talent and interest did not.
Duckworth also explains that your grit score can be changed. In her family, she uses the Hard Thing Rule to increase the Endurance of every family member. The Hard Thing Rule is actually three rules.
1 – Everyone has to do a Hard Thing
This includes Mom and Dad. A Hard Thing is something that requires daily deliberate practice. It must be something about which they are passionate and want an outcome and progress can be measured against the desired outcome.
2 – You can quit
In this plan, you can quit however, it must be at a natural stopping point such as the end of a season or a class. You cannot quit on a bad day or because it conflicts with something else you want to do. You are required to Endure to the end. Now that the author’s daughters are in high school, this rule has been amended to make a two-year commitment to a Hard Thing.
3 – You get to pick your Hard Thing
Since it is important that your Hard Thing is something that you are passionate about, it only makes sense that it is something you pick for yourself. Being forced to play the piano when you always hated it will not lead to developing grit, it will lead to resentment and wasted time.
Gritty people tend to possess self-control and stay focused on well-defined goals over a long period of time. No matter what your area of expertise or interest, the Hard Thing Rule can be used to build your Endurance both personally and professionally. As you develop Endurance in one area, it will lead to Endurance in other areas as well.
This month, make a daily time commitment for a practice about which you are passionate and build up your own Endurance.